Upon entering many Japanese businesses and restaurants, people often notice a ceramic cat, one arm stretched into the air to welcome you into their business. You may wonder “What is this cat doing here?” or “Do all these store owners just really love cats?” The ceramic figure isn’t just an ordinary cat, however, but a Maneki Neko (招き猫), also known as the Lucky Cat. Maneki Neko translated literally means beckoning cat or welcoming cat and it’s very popular to put this figure at the entrance of business or homes in order to welcome good luck into the building.

There are so many legends about the history of the Maneki Neko that it’s impossible to accurately pinpoint when, or even where, it was first seen. One of the most common and widely accepted legends is centered on Gotokuji Temple in the 17th century Japan. In the story, Gotokuji Temple was seeing rough times; the temple priest barely had enough food for himself, yet he took in a stray cat he saw outside of the temple. Times only got worse for the temple until finally the priest told the cat that he may be better off if he just left the temple to fend for himself. The cat ran off but rather than leave the temple, he sat outside the front gate.

A group of samurai, headed by Lord Ii Naotaka of Hikone, had stopped under a tree across from the temple gate to take shelter from the rain when Lord Ii saw the cat preening with one paw raised. The paw looked to be gesturing to him so he and his men crossed the road to the cat. As soon as they reached the other side of the road, a bolt of lightning struck the tree they had just been standing under; they followed the cat back to the temple and were graciously welcomed by the priest. Lord Ii became a patron of the temple out of graciousness toward the cat who had saved their lives and because of the patronage, the temple flourished. When the cat died he was given a grave in the temple and had a statue not unlike the current day Maneki Neko placed by the grave. Gotokuji Temple still exists today, now a part of a Tokyo suburb, and people still venture to the temple to visit the cat’s shrine. At the shrine people can buy Maneki Neko which they either write wishes on and leave at the shrine for luck or bring home as a souvenir in hopes of welcoming the luck into their own home. 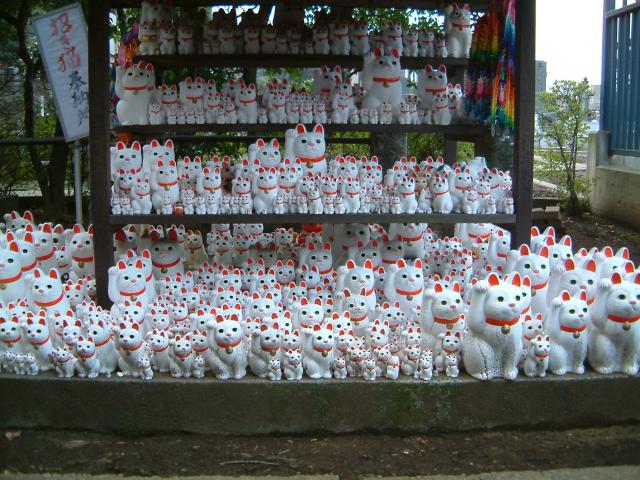 The main difference between Maneki Neko is which paw is raised to “beckon” luck. Most businesses with a Maneki Neko will choose one with the right paw raised, as this paw is supposed to welcome luck in wealth and good fortune. Originally used in geisha houses and restaurants or businesses related to the nightlife, the left paw brings in customers and people. Recently, as people begin to use Maneki Neko in their own homes, this is the one they choose as a way to invite in personal luck. There are also newer Maneki Neko which sport two raised paws, one usually higher than the other; these Maneki Neko are supposed to provide protection in hopes of keeping the home or business safe as it is.

Another popular variation in Maneki Neko is the color of the cat. There are multiple different colors of Maneki Neko, and newer colors are popping up and becoming more and more popular. 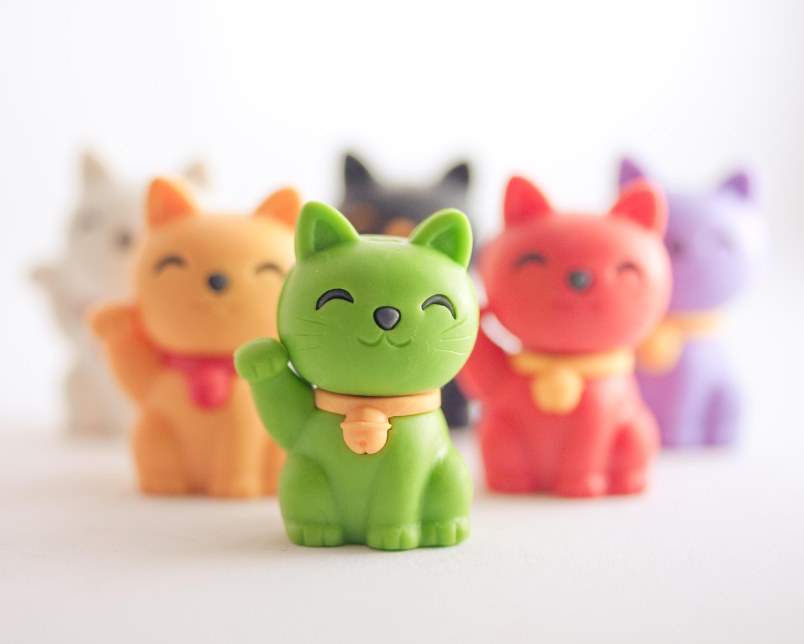 Tri-colored or calico cats have a white base with brown and black spots and are often considered to be the original color. The colors are based on the Japanese bob-tailed cat breed.

White cats are used for luck in purity and happiness.

Black cats are for safety and are supposed to ward off evil or people wishing to cause harm.

Golden cats, often seen in businesses, are for wealth and prosperity.

Red cats are for protection against evil and illness and are often used to protect children from illness or to bring luck in children becoming healthy.

Pink cats are a newer color, used for luck in love and relationships

Green cats are another new color, used for luck in education and studies and sometimes for health.

Maneki Neko are often seen holding an oblong golden coin, modeled after the ryo (両), an older form of Japanese currency. Very often sen man ryo (千万両) can be seen written on the coin; this means 10,000,000 ryo, which, at the time, was a great fortune to have. Another common phrase is kai un (開運), meaning “open luck.” Sometimes the Maneki Neko holds a small mallet that it supposed to attract wealth when shaken. Maneki Neko holding a fish, usually a carp, are supposed to symbolize abundance and good fortune and one holding a marble or gem is supposed to attract fortune or wisdom.

Maneki Neko can often be seen either holding a banner or with a banner stuck right on their front. One common banner reads “Sen Kyaku Man Mai” (千客萬来); this means, literally, “1000 customers come” and is commonly seen in businesses. Another common banner reads Genkin Manpuku (現金満腹), which literally translates as “bellyful of cash” which holds the meaning of getting even more wealth than you wish for. A third common banner, also used for businesses, reads Shou Bai Han Jyou (商売繁盛), which means “thriving business”. The fourth common banner reads Kin-Un Sho Fuku (金運 拐福) meaning to invite in luck in money.

Maneki Neko are nowhere near losing their popularity among the people in Japan; in fact there is a city in Aichi Prefecture, close to Nagoya, called Seto. Every year in Seto they hold a Maneki Neko matsuri, or festival. If you’re in Seto around the end of September it’s not uncommon to see Maneki Neko being sold on every corner or people walking around with their faces painted as cats. Seto isn’t only host to the Maneki Neko matsuri, but also to a large Maneki Neko museum which boasts a collection of over 1,000 Maneki Neko!

At Asahi there are a number of different Maneki Neko available varying in size and color. We have Maneki Neko coin savers and even solar Maneki Neko, which bob their head from side to side or wave their arm, calling in good luck. All you need to do is figure out what your want your Maneki Neko to beckon in then come get your own Lucky Cat to bring fortune into your home.

Are there any topics that you’d like to see us cover? Leave a comment and let us know!