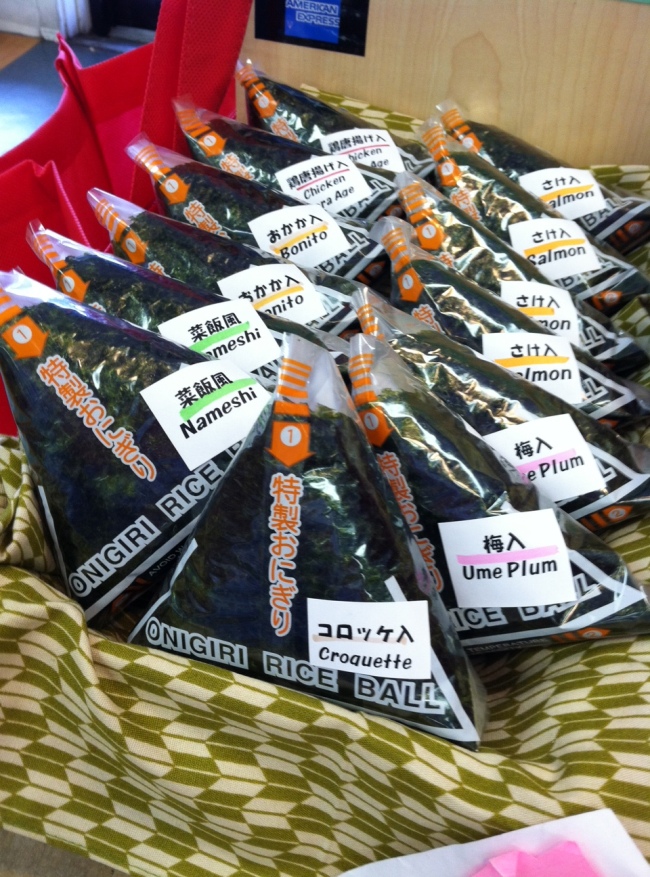 Onigiri (お握り), also called omusubi (お結び) is better known in English as a “rice ball.” Onigiri are generally a rounded or triangular shaped clump of rice, usually stuffed with a filling (traditionally a salty or sour filling that is easily preserved) and then wrapped with nori (のり), a roasted sheet of seaweed.

It is unknown when onigiri was first originally made, but there are papers dating it back as far as the Heian period (平安時代), which spanned from the years 794 to 1185. Until the 1980s, onigiri was only made by hand because many believed that the technique used to roll onigiri was too complicated for a machine to be able to replicate. In the 1980s, however, a machine was created that could produce the triangular shaped balls of rice and allowed for mass production of onigiri.

There are three traditional shapes for hand-rolled onigiri: triangular, round and flattened, and cylindrical (tawara in Japanese). There are many types of onigiri even beyond their shape. One type is the basic, plain rice ball. These are the simply made by cooking and shaping the rice, then seasoning them with a little bit of salt.

The second type of onigiri is one that you will see most commonly in stores throughout Japan, these are the filled and wrapped onigiri type. These onigiri, when made by hand, are made by shaping the rice around the chosen filling, centering it in the rice ball. The filling can be anything the maker wishes to add, the only limit is what the rice is able to hold! The wrapping of the onigiri is most commonly nori, roasted seaweed, which can be either placed directly on the onigiri when the rice is warm or carried separately to keep the nori from becoming soggy or sticky.

Mixed rice onigiri is the fourth type, which is, as the name would suggest, rice that is mixed with something before the ball is formed. Anything can be used in this onigiri so long as it’s not too wet, which could cause the rice to fall apart. Onigiri made this way usually has no wrapping, as the rice is colorful and the lack of wrapping allows the maker to show off the onigiri itself.

There are many variations on these more common types of onigiri. The wrapping of onigiri, traditionally nori, can be changed to many other wraps. Common alternate wrappings are shiso leaves, cabbage, lettuce and dried kombu (kelp). Yaki onigiri is also common; it’s a simple unfilled riceball but instead of being salted it’s grilled until crispy then brushed with something with a salty flavor, such as soy sauce or miso.

Most convenience stores in Japan stock onigiri like stores in America will stock pre-made sandwiches. Fillings sold in stores can range anywhere from the traditional, such as ume (pickled plum) and sake (salmon), to more original flavors like mentaiko (spicy roe) and even miso!

Some of the most popular traditional fillings for onigiri are shiozake (salted, flaked salmon), umeboshi (pickled plum), tarako (code roe cooked and cut into chunks), okaka (bonito flakes), and shio kombu (kelp cooked in a soy sauce based sauce until salty and soft). All of these traditional flavors are fairly salty, as the salt pairs well with the plain, unseasoned rice. Salty fillings also help the onigiri stay preserved to eat over time, which is useful for people who pack their bento with onigiri.

There are other flavors that are less traditional but are just as popular, such as tempura, tsuna mayo, karaage (fried chicken) and various mixed pickles. These flavors usually have a shorter shelf life, but are equally tasty.

At Asahi, our onigiri are handmade in store Monday through Friday. You can find them up front by the sweet breads by the register. We make many staple flavors that you could find in any convenience store in Japan, including salon, bonito, umeboshi, tsuna-mayo and mentaiko. Our original flavors are shishito-miso (shishito pepper mixed with miso paste) and the Austin (which is filled with quinoa, hijiki seaweed, kidney beans and almonds.)