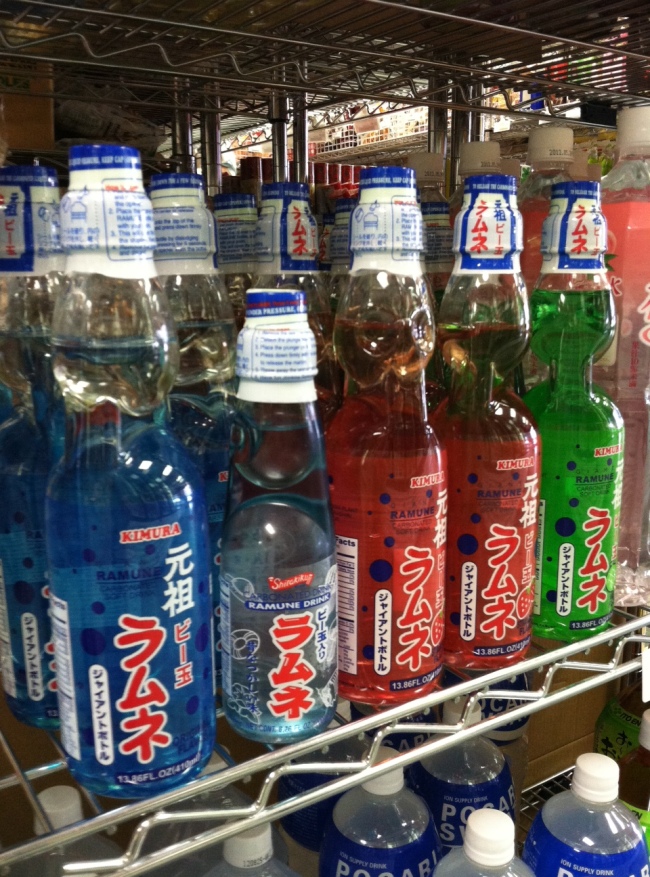 Ramune (ラムネ) is an iconic Japanese soda often sold during summer festivals in Japan, best known for it’s unique – and fun – “marble bottle.” The bottle’s main feature is a marble that, until opened, is held in place at the lip of the bottle by the pressure of the carbonation held inside the bottle. In order to open the bottle, you use the punch that comes with the bottle to force the marble away from the lip. The marble then falls to the bottom of the neck, which is designed with ridges in order to contain the fallen marble in place. The bottom of the neck is thinner than the marble to keep it from dropping to the bottom of the entire bottle. The two ridges on one side also help keep the marble from blocking the lip when you’re taking a drink.

Ramune has been in Japan for over 100 years and was likely first bottled in Kobe in the 1870s. Ramune changed its packaging to the now recognizable bottle in the 1880s, when the “Codd bottle” design was popularized around the world. The Codd bottle is what the Ramune bottle is officially called, is named after the English inventor, Hiram Codd. The bottle began going out of style after the invention of the screw-top lid, but Ramune stuck with the design, changing it as needed but never straying far from the original design. In fact, the main difference between the original Codd bottles and the ones in which you can buy Ramune today was the addition of the ridges designed to keep the marble from blocking the flow of the drink, which was added in 2006! The Ramune bottle is quite popular with Japanese consumers because of the jingling sound the glass marble makes as it rolls around the empty bottle. The sound is reminiscent to that of wind-chimes, or furin (風鈴), as they’re called in Japanese.

The name “Ramune” is derived from the English word “lemonade,” as the original flavor tastes crisp with a hint of citrus. Ramune comes in many other flavors, too. Other Ramune flavors that you can find at Asahi are: coconut, lychee, grape, melon, pineapple, and strawberry. Asahi also carries grape and original flavored Ramune in aluminum bottles for people who wish to enjoy the fresh taste of Ramune without having to go through the production of opening the glass bottles; for many, however, the uniqueness of the glass bottle just adds to the fun of drinking this iconic drink. It is a great caffeine-free alternative to many sodas.