October is World Saké Month, and over here at Asahi we want to use this as an opportunity to help demystify saké. So jump into our sake crash-course and you’ll be ordering and buying like a pro in no time!

So: what is saké?  While it can be written 酒 in Japanese, preceded with an honorific お (o), 酒 (shuu) on its own can also refer to any alcoholic drink, so it is often called 日本酒 (nihon shuu), or ‘Japanese alcohol.’ Saké is a fermented rice wine, but there are enough different types, grades and flavors that it’s impossible to just say it’s rice wine and have that be the end of it. The intricacies in the name alone probably make it obvious that saké is more than ‘just a drink’ in Japanese culture and history.

It’s not clear when exactly saké was first made, but historical books date it as far back as the Nara period of Japan (710-794 common era.) Then, starting in the Heian period it showed up in religious ceremonies, street festivals and even just common drinking games. By the 10th century, even shrines and temples were brewing their own saké.

Luckily the brewing process has changed over the years, since the earliest known brewing process actually involved a large bucket and a bunch of townspeople manually “polishing” rice and nuts by chewing them then putting the bucket away for fermentation, which was aided by the added saliva. Ever since the discovery of koji–a mold enzyme used in the fermentation process that we’ve talked about before in our miso and natto blogs–the process has become much easier to stomach. Thankfully for us, by the time saké reached its full popularity in Japan, the original process had completely died out. 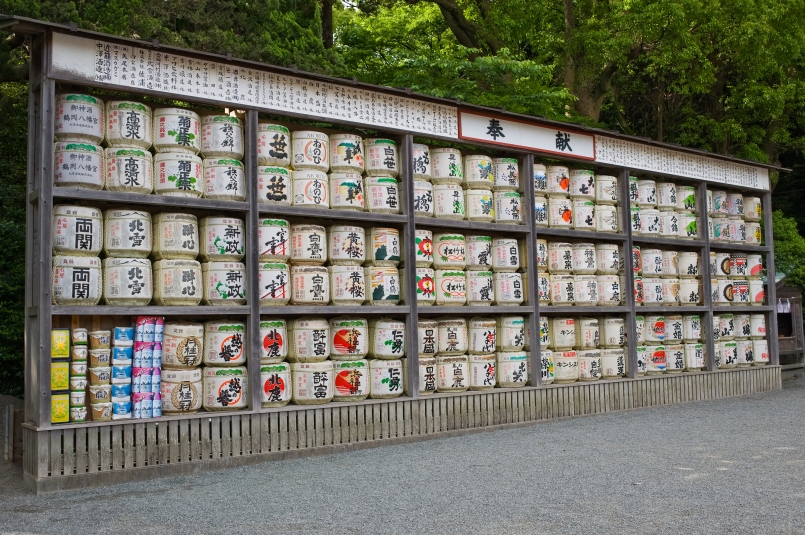 By the 1300s, between the Japanese government and the shrines and temples that brewed saké, the drink was being mass-produced across the company, and it was around this time that saké reached its most popular. It was even considered a godly drink, due to its prevalence in Shinto ceremonies. Then during the Meiji Restoration (1868), laws were written which allowed anyone with the money and knowledge to brew and distribute saké. This allowed around 30,000 breweries to pop up in Japan within the year. But, due to high taxation, these companies began to die out over time.

In the 20th century, saké saw a couple of changes that shapes the sake that we drink today. First was the growth in industrial factories, which allowed for both more sanitary brewing as well as more durable and lasting results. The most important, however, was a rice shortage during World War II, which meant that breweries had to start adding alcohol and glucose to yield more product from less rice. This brewing process affects over half of the saké still brewed today and gives saké the wide variety that we have today.

When it comes to buying saké, the easiest way to narrow down your search is to decide which grade of saké you want to buy. This is often one of the most intimidating things when trying to buy saké for yourself, so we’re going to break it down for you right here.

Before the saké is broken down by grade, it’s split in two: pure rice saké, 純米 (junmai) and the saké with added alcohol. There are three grades in each group: 純米 (junmai), 純米銀所 (junmai ginjo) and 純米大吟醸 (junmai daiginjo) in the junmai category and 本醸造 (honjozo), 銀所 (ginjo) and 大吟醸 (daiginjo) in the other.

The higher the saké grade, the more “premium” it’s considered to be, as it generally tends to raise in quality and complexity.  The difference in grades is mainly based on how much of the germ has been removed from the rice, also known as polishing the rice. The amount of polishing is usually indicated in percentage. The larger the percent, the less the rice has been polished; the less the rice has been polished, the more left over proteins and fats that can affect the overall flavor of the saké.

From lower to higher grades:

Junmai and Honjozo – Both are made with koji, water and rice that has been polished to at least 70%. Honjozo has a slight amount of distilled alcohol (also called brewer’s alcohol) added. Often has a heavier and fuller flavor.

Junmai Ginjo and Ginjo – The rice for these grades has to be polished to 60% or less. These again are made with koji, water and rice, with distilled alcohol added to the ginjo. The higher quality is also often due to the foregoing of machinery in the brewing process, instead they’re often brewed with more traditional methods and tools. Also fermented in cooler temperatures over a longer period of time, to allow the flavors to mature. The flavors are often described as lighter, sometimes fruity.

Junmai Daiginjo and Daiginjo –  Once again, made with koji, water and rice, this time milled to at least 50%, with distilled alcohol added to the daiginjo. The brewing process of these are almost always entirely traditional–or at least inspired by tradition–and labor intensive. The flavors in these are incredibly complex and light, even the fragrance adds to the experience. The fermentation process is similar to that of the junmai ginjo and ginjo grades.

Also to be noted is there are occasionally 特別 (tokubetsu), or special, versions of any of these grades. This usually indicates that there’s something special about the brewing process about that particular saké or that the rice is even more polished than usual for that specific grade.

What’s the deal with “cloudy” saké?

If you’ve tried venturing into the saké world, you may have come across 濁り酒 (nigori zake). Literally “cloudy saké” in English, nigori is just unfiltered saké. This means that the sake is finished and bottled without removing all of the fine rice particles that are left-over after the brewing process. This is what gives its distinctive “cloudy” look when you shake it.

The leftover rice in nigori gives it a distinctive rice flavor and what can best be described as a smooth, creamy texture. This makes this a great choice if you like your drinks sweet instead of dry.

You might be thinking “Dry sake? Sweet sake? How am I supposed to know what’s what?” Luckily, there’s a system that takes away the confusion in trying to find out where different sakés fall on the scale. It’s called the Saké Meter Value, or the SMV, and it measures on a scale of +15 through -15 if a saké is dry, sweet or somewhere in between. Usually you’ll find a number or even a graph on the back of the bottle that’ll tell you exactly where it falls on the scale.

If you’re in our store, we even have information cards that give you an easy-to-read SMV for the saké you’re curious about. There’s even flavor notes on the cards; just snap a pic and impress everyone when can tell them about the subtle flavors and smells of your cup of saké.

What about warm saké?

The main factor to look at when trying to figure out if you’re supposed to drink your saké warm and cold is based on the different grades we went over earlier. Since heating the saké tends to mull the intricate flavors of the drink. The higher the quality of the saké, the more complex the flavor profiles, meaning that the higher grade sakés are generally meant to be enjoyed chilled. So if you’re looking for a warm saké now that it’s starting to get cooler out, you’ll want to look for a Junmai, Honjozu or even a “Futsuu”–or common–grade saké.

If you’re ever in doubt, though, most of the saké you buy in the store will tell you on the brand the most enjoyable way to serve it and even the best foods with which to pair the saké!

Ultimately, whether or not your warm your saké is can be dependent on the brand or if it’s filtered or unfiltered. But don’t underestimate your own personal taste, too. Find out which sake you like the most and how you like to drink it.

That’s all there is to it?

So, we hope that by now you can walk into any sushi restaurant and wow everyone there with your knowledge or go buy a bottle for your next dinner party and impress your friends. Before you drink your saké, make sure you let out a Japanese “cheers!” by saying “kanpai!”

Are there any interesting saké facts that we didn’t include? Tell is about it in the comments below! You can also suggest a topic for our next blog, we want to write what you want to read!