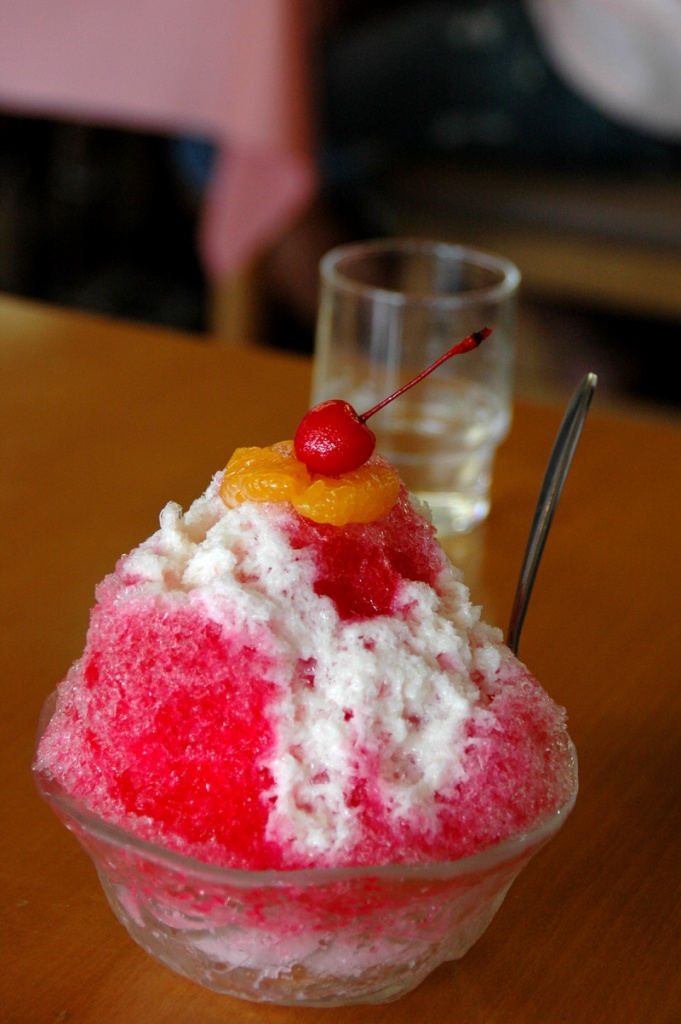 Kakigori (かき氷), or Japanese shaved ice, is a summer favorite in Japan and will surely bring that natsukashii (nostalgic) feeling to anyone who eats it. A refreshing dessert made of shaved ice covered in a sweet syrup and differing toppings, this treat is sure to be the favorite of anyone who eats it.

For a sweet that seems so modern, it appeared by court-lady Shonagon Sei (清少納言) in her diary, which dates kakigori back at least 1,000 years! Shonagon wrote about how vendors would shave ice by hand and then sell their wares, called kezurihi (削り氷) at the time, sweetened with a natural syrup. According to scholars the sweet syrup was hard to come by, which means it would be a huge treat to be able to eat kezurihi. The modern version of this cold snack was created in Yokohama in the late 1860s, and by the 1920s it was more uncommon to not see the hand-cranked kakigori machines everywhere in the hot summer months. These days, it’s tough to go a block in the summer without seeing the familiar blue and red kakigori noren signaling a kakigori shop. 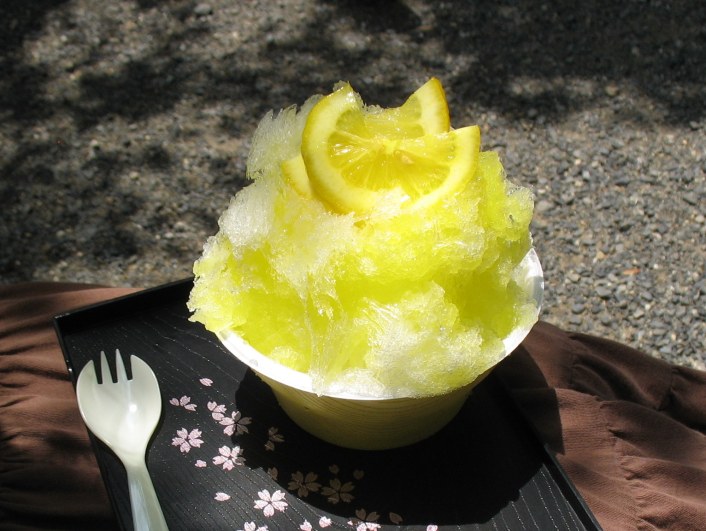 While it’s often considered “Japanese shaved ice” or a “Japanese snow cone” there are actually a lot of factors which separate it from its American counterpart. Starting with the base, kakigori is made with a very thinly shaved ice often compared to snow in texture. This is because, rather than being crunched up like a blender, the ice for kakigori is spun on a hand cranked machine and shaved off of the outside into thin, fine layers. Toppings also separate this cold treat from American snow cones; while American snow cones generally just have a sweet syrup poured on top of the ice, kakigori is usually served with a variety of extras including fresh fruit, anko (あんこ) or sweetened azuki red beans and, of course, the sweet syrup flavoring. You can also drizzle sweet cream or condensed milk over kakigori for an added decadent flavor. Even the way it’s served is different from the American version; while people in America are used to getting their shaved ice in a paper cone or cup, kakigori has so much going on that it can only be served in a bowl. You also need a spoon to enjoy your kakigori, as there are too many delicious extras to just be bitten into like you might an American shaved ice. 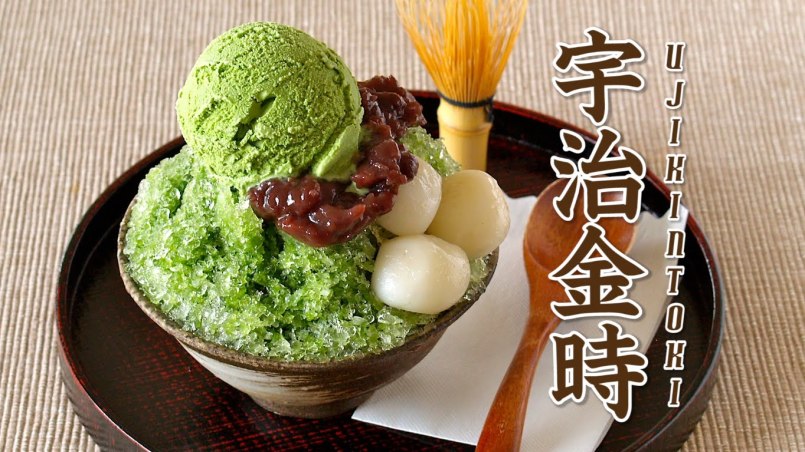 When it comes to kakigori you can enjoy the variety of flavors, anything from strawberry flavor to the unique “blue hawaiian” flavor, or you can enjoy one of the kakigori recipes, such as kori gyunyu (氷牛乳) or uji kintoki (宇治金時.) Kori gyunyu is a very simple kakigori; its name literally translates to ice milk. It isn’t that simple, though, as kori gyunyu usually has a homemade lemon syrup sprinkled on top of the ice. This gives it a refreshing flavor, especially in the heat of summer. The ice in kori gyunyu is also very unique; rather than using ice made from water, kori gyunyu uses frozen milk as it’s base. Uji kintoki is a type of kakigori that’s bursting with very Japanese flavors. This kakigori has a delicious matcha (抹茶) syrup poured over the top of the ice. Along with the the green tea syrup is also a generous helping of anko. Finish this off with some fresh whipped cream and, for an even stronger flavor, more matcha powder can be sprinkled on top this very Japanese sweet.

The delicacy of the ice in this Japanese shaved ice may scare many people away, but it’s possible to make your own kakigori at home! You can buy your very own kakigori ice shaver at Asahi (it’s much smaller than any you’d see at a kakigori stand in Japan, luckily) as well as many flavors of syrup (including matcha syrup, if you’re wanting to make uji kintoki) and anko to add extra flavor and texture to your snack.

What’s your favorite flavor of kakigori? Is there any other shaved ice from around the world that reminds you of the Japanese version?

Are there any topics that you’d like to read about on the Asahi blog? Leave a comment below and let us know! Your topic could be the next one we cover!