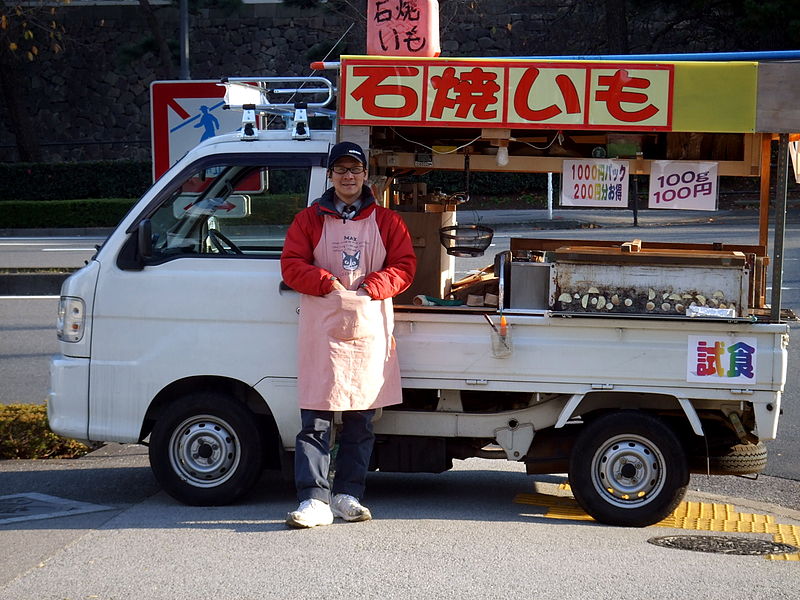 In Japan it seems like as the wind blows in the winter weather it also blows in the calls of  “O-imo da yo! Yaki-imo da yo!” from multiple ishi-yaki-imo-ya (石焼きいも屋).  Ishi-yaki-imo-ya are mobile food sellers whose specialty, and in fact their only menu item, are stone-baked satsuma imo (さつまいも), or Japanese sweet potatoes. These yaki-imo-ya used to consist only of a seller pulling around their cart, which housed a wood burning stove constantly baking sweet potatoes, but recently, while the original carts have not yet gone out of style, the call can be heard coming from the loudspeakers on trucks driving through the neighborhood. 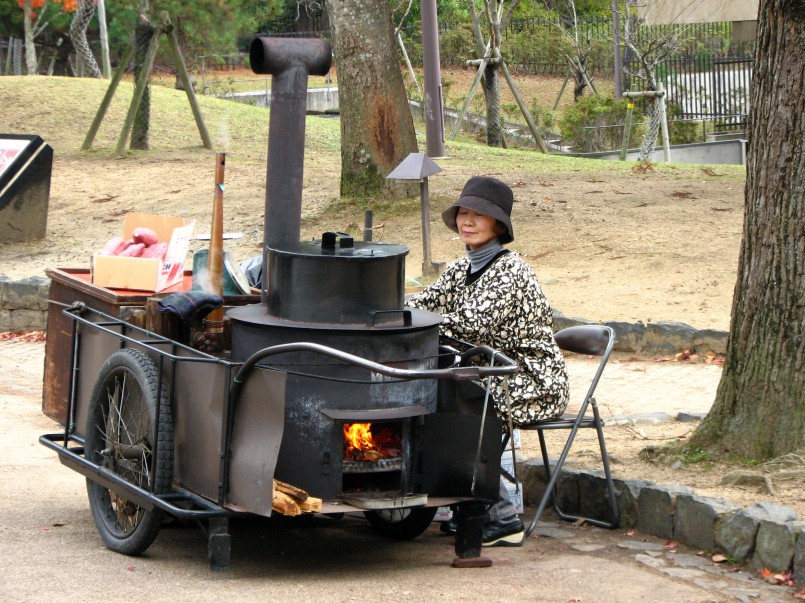 Satsuma imo are eaten year-round, but are synonymous with the winter season; just as berry or apple picking is a common outing in America, imo hori (芋掘り), or potato digging is a very common activity for any fall day. Sold from a truck, yaki-imo are usually enjoyed plain as a whole, steaming potato; usually broken in half and wrapped in newspaper to protect hands from getting burnt. You can often hear people gathered around yaki-imo-ya crying “Achi achi!” or “Hot hot!” as they move their potatoes from hand to hand; this doesn’t stop them from enjoying their meal immediately after they buy it, however, as yaki-imo taste their most delicious when they’re still steaming hot. If you want to make your own yaki-imo, it’s very easy to do at home. Usually you would make them in a stone oven, similar to brick pizza ovens. If you don’t have a stone oven just sitting around at home, no need to worry; you can replicate this method easily with just your home oven and some tin foil! Just wrap the satsuma imo in the tin foil and bake it for about 40 minutes. For people wanting to eat their yaki-imo almost as quickly as you can get it from a ishi-yaki-imo-ya, there’s also a short-cut: wrap your satsuma imo in a damp paper towel and stick it in the microwave until it gets soft in the middle, then stick it in the oven for a few minutes so the satsuma imo’s skin can gain a nice, crisp consistency.

Another common satsuma imo dish seen in the winter months is daigaku imo (大学いも), delicious deep-fried satsuma imo coated with a syrup-sugar sauce and garnished with sesame seeds. The name is literally “university potatoes” and it suspected to originate from either being a dish that was served at festivals at colleges or in smaller restaurants that surrounded college campuses, but there is no sure consensus.

No matter what the weather or the season, any time is a great time to enjoy yaki-imo at home. If you want to make some yaki-imo or daigaku imo you can buy satsuma imo any time at Asahi Imports! Make sure you use these Japanese sweet potatoes to get the authentic yaki-imo taste! Try yelling out the ‘yaki-imo call’ to call everyone to the table when you make these delicious treats for the full experience.

Are there any topics that you’d like to see us cover? Leave a comment below and let us know! Your topic could be the next one we cover!