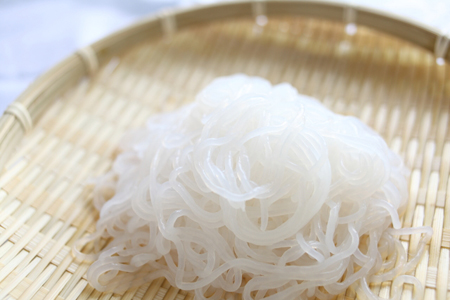 Shirataki (しらたき) noodles, often called “miracle noodles”  are noodles that are very low in carbohydrates and calories and are made of konjac, or devil’s tongue yams. Patties of konnyaku (こんにゃく), which is merely shirataki before it’s turned into noodles are also available. Shirataki and konnyaku are mostly flavorless, as the majority of their make-up is water and glucomannan, a water-soluble dietary fiber. Because of this property, shirataki and konnyaku can take on almost any flavor that it’s cooked with. Konnyaku can also be used as a vegan substitute for gelatin without adding a flavor.

Although it’s a staple in Japanese dishes, shirataki has gained popularity outside of Japan as a new diet food. Shirataki noodles contain almost no carbohydrates and calories, no fat, no cholesterol, and no sodium, but they still leave you feeling full after eating them. They have no starch, so they can fit in any starch-free diet or gluten-free diet. Shirataki noodles are made almost entirely of a fiber called glucomannan, which has many benefits beyond dieting. Because the glucomannan is the major ingredient, it isn’t taken apart after ingestion, which helps keep a full feeling long after eating. Glucomannan is also a great way to help control type II diabetes; because it’s a fiber, it slows digestion, which gives the body a longer amount of time to absorb glucose and allows for a slower release of insulin.

Shirataki and konnyaku come in a few different varieties. There are white and black varieties and some made with tofu. White shirataki is the original color, while black shirataki is processed with seaweed, which gives it it’s own unique flavor and infuses it with calcium and iron. It is also very common to find tofu shirataki, which is just shirataki that has had tofu added in the noodle making process. The tofu is added to give the noodles a less rubbery texture and more of a similar texture to wheat noodles. The added tofu however, also adds a small amount of protein and carbohydrates.

Because of shirataki and konnyaku’s ability to absorb flavors, it can be used in a variety of dishes. Shirataki is often used in Japanese hot pots or nabe dishes. One popular dish is called sukiyaki (すき焼き), a type of soup or stew with thinly sliced meat, vegetables, and shirataki noodles; because they soak in the broth, they pick up the flavor. Shirataki can also be “dry fried” before making a dish. To dry fry shirataki noodles, just spray a little bit of cooking spray (zero-calorie cooking spray if you want to keep the noodles healthier) and fry them on high until the outside is dry; this way of cooking them gives them a flavor more similar to wheat noodles. After being dry fried, they tend to go better with different pasta sauces than they would in their original state. When preparing shirataki or konnyaku, you may notice a slightly “fishy” odor upon opening the package; there’s no actual fish or fish products in the noodles, but the liquid it’s stored in tends to give them this smell. The best way to get rid of the smell is to rinse them with cool water for a minute or so, though some people also boil them shortly.

There are many ways to cook with shirataki and konnyaku; there is a good list of shirataki recipes here and some konnyaku recipes here.

Asahi carries shirataki and konnyaku, both black and white, and tofu and organic shirataki varieties. Konnyaku and shirataki have a great shelf life; they should be stored in a cool area or refrigerated, and can be kept fresh for about three months. Look for them in the refrigerated section of the store.